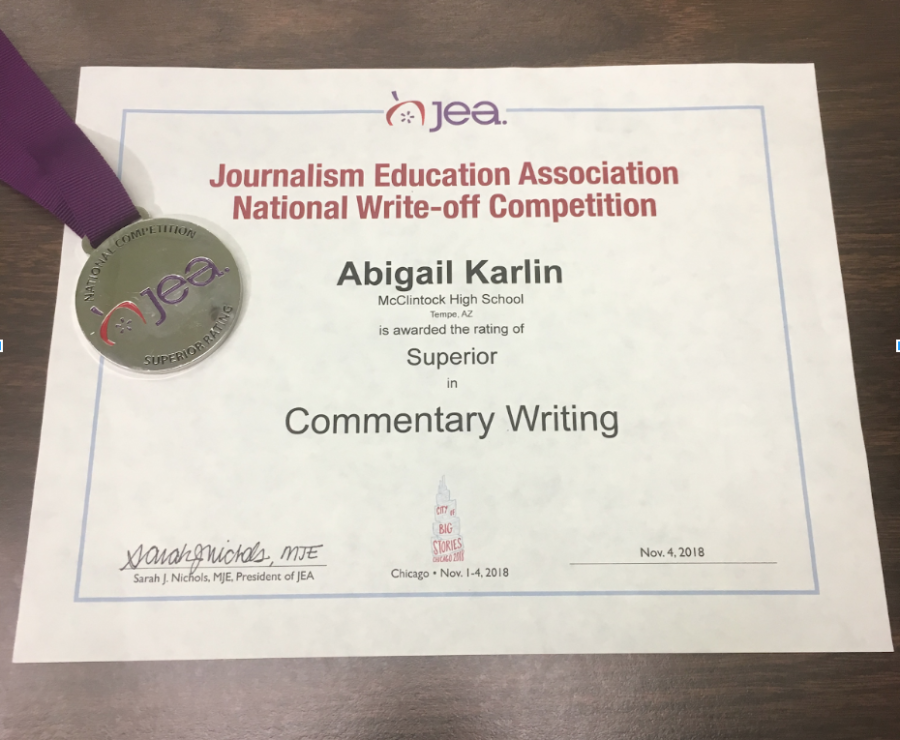 Congratulations to Abby Karlin for her Superior Award in the Commentary National Write-Off Competition in Chicago! The winning story, titled ‘Protest is Patriotic’ is below.

Despite the everchanging, angry world outside, there is one constant in my life: My dad loves football. Although we haven’t really gotten along since I told him I didn’t, we agree that censorship does not belong on that– or any for that matter– screen.

2016: Colin Kaepernick directly targets the home audience and they cannot look away. From sports bars and living rooms around the country, we listen. Kaepernick knelt, and although the anthem was blaring in my ears, my mind went quiet. It turns out I wasn’t the only one.

There was an immediate public response, positive and negative. Those who stood (metaphorically) with Kaepernick to protest racism and police brutality. And then there were those against, who believed that the country, flag, and football shouldn’t be disrespected. (pro/con.org). See, America has become desensitized to police brutality. It was too easy for the public to overlook, until it interrupted Monday Night Football.

So the country shouldn’t be disrespected. But what about the people?

Doesn’t the constitution say “all men are created equal?”

Doesn’t the pledge of allegiance say “with liberty and justice for all?”

Why should we stand for these things when we cannot uphold them.

The answer is: you shouldn’t. It makes an irresponsible citizen of democracy to stand for things that you don’t believe are right.

Protest is Patriotic. That’s why the right to gather is in the first amendment.

Look at mass movements like the Women’s March, March for our Lives, Red for Ed, the Walk Out to Vote; these movements dominate news cycles and change lives to make a real, lasting impact.

No one should be censored by the government, by the NFL, and certainly not by the President of the United States.

Protests are a powerful way to make your voices heard.

“History has taught us that both patriotism and protest are like water. If the force is strong enough, it cannot be suppressed,” NFLPA executive director, DeMaurice Smith, tweeted.